We served this babka for afternoon tea, fresh from the oven, and with the kitchen smelling like a sweet cinnamon heaven.

It made quite the statement as it was set it down in parchment paper to slice at the table and serve with butter. 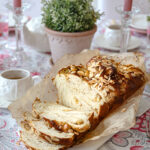 melathome We served this babka for afternoon tea, fresh from the oven, and with the kitchen smelling like a sweet cinnamon heaven. It… Desserts and Cakes Apple and Cinnamon Babka European Print This
Serves: 6
Nutrition facts: 200 calories 20 grams fat
Rating: 5.0/5 ( 1 voted )

If you’ve been following my stories recently you

Advent calendars at the ready! Last chance to buy

Festive breakfast as seen in this weeks @countryli

Simple Autumn flavours. Have you made this one? Th

Did someone say #nationalbundtday ??? Cake perfect


Error: API requests are being delayed for this account. New posts will not be retrieved.

This website uses cookies to improve your experience. We'll assume you're ok with this, but you can opt-out if you wish. Accept Read More